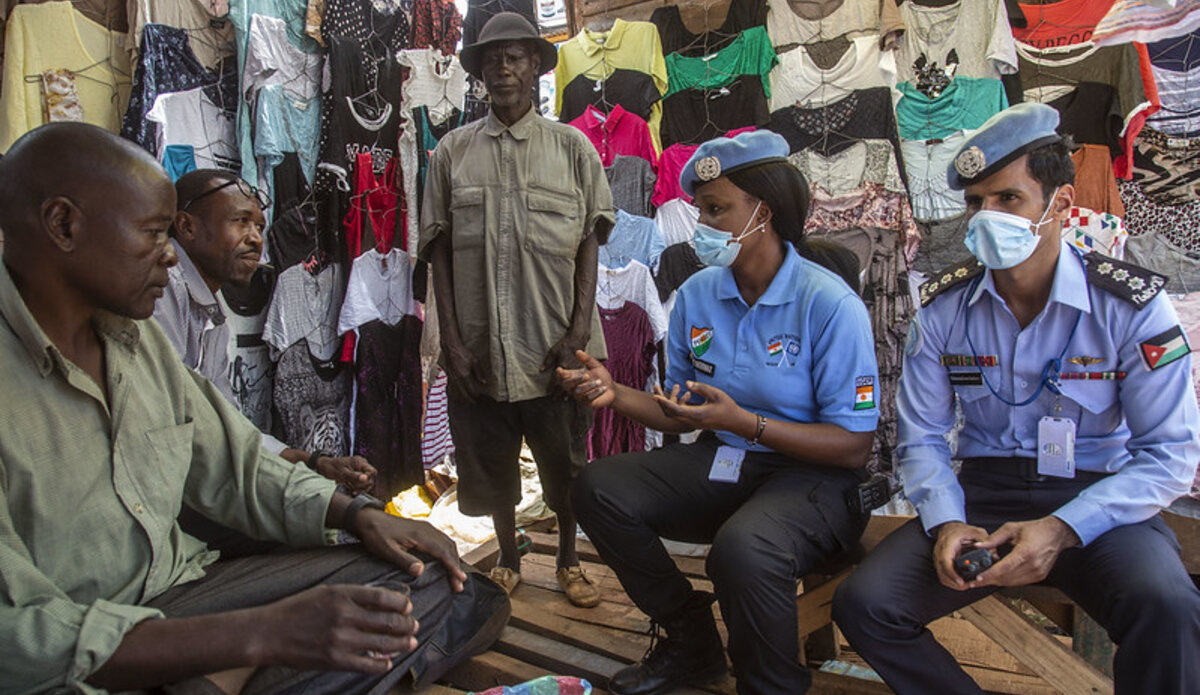 The Security Council resolution 2149 (2104) from April 10th 2014 authorized the creation of the United Nations Multidimensional Integrated Stabilization Mission in the Central African Republic (MINUSCA). However, MINUSCA has effectively started implementing its mandate since September 15th, 2014 when there was the transfer of responsibility with MISCA. Security Council authorized MINUSCA Police to use all necessary means to achieve its mandate, within its capacity and area of deployment.

MINUSCA POLICE COMPONENT AND ITS POSITION IN THE CENTRAL AFRICAN REPUBLIC

MINUSCA Police is formed of 400 IPO and 12 FPU, each unit consists in 140 men and women. All in all, the resolution 2387 of the Security Council establishes an authorized strength of 2080 UNPOL.

MINUSCA Police established its Headquarters in Bangui, seat of the main institutions and also the biggest city in the country. The majority of the UNPOL staff is deployed in Bangui. 4 FPU are deployed out of the capital (Bouar, Kaga – Bandoro, Bambari, and Bria), while 100 IPO are deployed in 11 field offices, spread throughout the entire Central African territory.

SUPPORT TO THE NATIONAL SECURITY FORCES

In line with the latest resolution (S/RES/2387) of the United Nations Security Council, the mandate of MINUSCA Police focuses on the following main missions:

The protection of civilians is the permanent priority of UNPOL. The United Nations peacekeepers protect civilians without consideration of their origin, religion or ethnic background. It’s the case, when the IPO make sure the rights of persons held in custody within the premises of police and gendarmerie are strictly observed.

Another aspect which reflects UNPOL’s protection of civilians is in training. All training sessions delivered include a human rights module which facilitates Central African Forces’ awareness of its importance as a priority. The same policy in place promotes women and their access to leadership position.

UNPOL further participates in the protection of civilians by building the capacities of policemen and gendarmes which contributes to the establishment of a security environment benefitting the populations.

Another important aspect deals with the physical protection of the populations, especially the vulnerable ones. The Formed Police Units are in charge of managing and ensuring the security of the IDP camps thus supporting the national security forces, where these ones are present.

In places where national security forces are not deployed, UNPOL conducts patrols and arrests in the same IDP camps in order to seize criminals’ weapons and arrest them in order to protect populations who have already too much suffered.

In order to accomplish this main mission of protecting civilians, UNPOL works in close collaboration with other sections of the mission such as Human Rights Section.

MINUSCA Police daily supports National Security Forces (NSF) via the IPO colocation in the police stations and gendarmerie brigades. This support takes different forms: support to criminal investigations, implementing community police, security patrols, and support to Law-Enforcement services. In counties where National Security Forces are not present or are not operational, UNPOL can perform arrests subject to clear legal conditions which should be enforced. People apprehended in this legal framework are handed over to local judicial authorities.

In 2016, MINUSCA Police and National Security Forces (NSF) worked in close collaboration to set down a five-year-plan of capacities building of Central African Police and National Gendarmerie in order to facilitate the efficient exercise of their missions, and in compliance with international standards in terms of respect of human rights, and gender considerations. This ambitious plan has been adopted by the President of Republic, stage which was followed by its implementation. It includes 4 phases:

First: The update of the normative framework which involves the review of laws, regulations and circulars in view of increasing the performance of local security forces. The preparation of a new deontology code for policemen and gendarmes is only an example.

Second: Recruiting a new generation of policemen and gendarmes representative for the Central African society in order to renew the staff. It ensures the development of sustainable links of trust between the law enforcement officials and the communities that they serve. In this respect, UNPOL has strongly supported the recruitment of 500 young policemen and gendarmes in 2017 on the whole Central African territory including 23% women.

Third:  training activities and especially specialized trainings which permit to create or develop the know-how especially related to criminal investigations and the capacity building in forensics;

Fourth: The rehabilitation and equipment. In this respect, a plan of rehabilitation of detention centers in police stations and gendarmerie brigades serves as example.