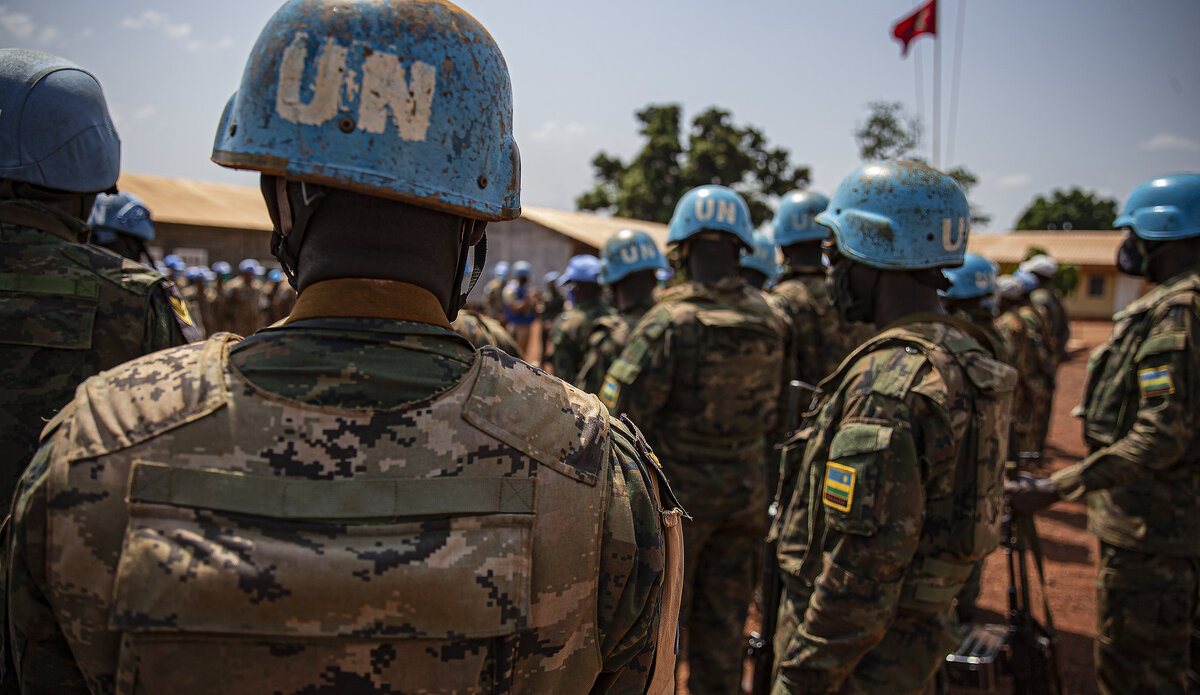 The blue helmets are the United Nations military personnel on the ground. Military contingents are provided to the UN by Member States.

On 10 April, the Security Council, by its resolution 2149 (2104), established the United Nations Multidimensional Integrated Stabilization Mission in the Central African Republic (MINUSCA).

In accordance with the decision of the Council, the official transfer of authority from MISCA to MINUSCA took place on 15 September 2014.

Adopting resolution 2217 on 18 April 2015, the Security Council reaffirmed its strong commitment to the sovereignty, independence, unity and territorial integrity of the CAR. The Council decided to extend MINUSCA’s mandate until 30 April 2016 and authorized a troop ceiling of 10,750 military personnel. The mandate extension occurred as Under- Secretary- General for Peacekeeping Operations, Herve Ladsous, declared that MINUSCA had reached its full operational capacity. The Force generation process was completed in the summer of 2015 with the contribution of an infantry battalion by Egypt as well as attack helicopters by Senegal. Deployment is ongoing to enable CAR authorities to respond more effectively to the need to protect civilians and restore state authority across the country.

As part of protection of civilians activities, MINUSCA troops have improved safety in several towns of the country by combatting trafficking and by removing illegal checkpoints.

In January 2015, the escorted convoy plan has increased road safety for thousands of vehicles on the main axes from Bangui-Bouar- Beloko, Bangui-Sibut-Kagabandoro and Bangui-Sibut-Bambari, MINUSMA also regularly conducted operations to facilitate the release of hostages and the return to their community of origin. MINUSCA’s operations aim to allow a gradual return of  internally displaced people to their villages.

To support the restoration of state authority, MINUSCA troops retook from February to April 2015 several public buildings illegally occupied by armed groups in Bria, Bambari and Batafango. MINUSCA peacekeepers also conducted major operations in the areas of Boda, Berberati, Carnot and Noa to arrest armed criminals who were handed over to CAR authorities to be brought to justice. These operations have contributed to gradually restore state authority throughout the national territory.

MINUSCA peacekeepers also contributed to strengthen freedom of movement by escorting on average 450 vehicles per week since the beginning of 2015. The Mission continues to  provide  armed  escorts  to commercial and humanitarian convoys along the main supply roads.

Through its engineering units, the Mission also worked on rehabilitating road infrastructures, including between Bouar and Baoro, as well as between Sibut and Bambari.
Since the signing at the Bangui Foreum in May 2015 of an agreement between the Transitional Authority and nine armed groups on the disamarment, demobilization, reintegration and repatriation (DDRR) of  ex-combattants and armed elements, MINUSCA troops supported the implementation of the DDRR programme. MINUSCA troops are present in Bangui and in regions across the country in support of the Transitional Authority to create security conditions conducive to a successful peace process.