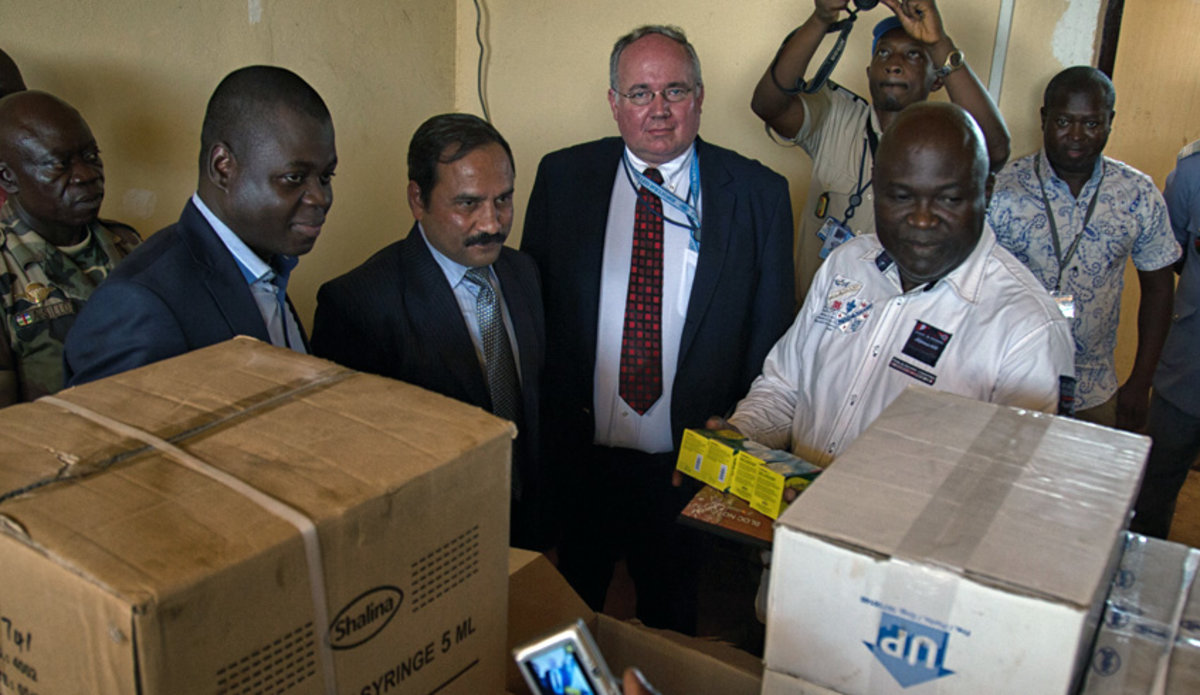 In the aftermath of  several years of conflict and violence in the Central African Republic, State institutions including the judiciary and prisons were either completely destroyed or seriously weakened, providing a fertile ground for impunity for the perpetrators of serious violations of human rights. Where they still existed, prisons typically suffer from extreme overcrowding, lack of food, absence of adequate medical care and poor sanitation. It is essential when building lasting peace and security to have a functioning and accountable judiciary, and to ensure prisoners are not forgotten.

Rooted in MINUSCA’s mandate (Article 33. a) of Res. 2217 (2015) and in the Memorandum of Understanding signed on 5 – 7 August 2014 with the Transitional Authorities of the Central African Republic, the Justice and Corrections Section carries out the following activities to support the Transitional Authorities to rebuild the country’s justice and correctional institutions:

Providing support and capacity building to the Transitional Authorities in the establishment and functioning of the national Special Criminal Court:

The Justice and Corrections Section supports the transitional authorities in their efforts to rebuild peace, restore justice, end impunity and ensure reconciliation in the country.   To this end, we provided technical assistance to the National Transitional Council Laws Committee in the drafting of the Law creating the Special Criminal Court.  Adopted by the National Transitional Council on 22 April 2015, the Special Criminal Court once established, is expected to contribute to addressing the continuing challenge of impunity for the majority of human rights violations and abuses.

Supporting the efforts to reinstate the criminal justice system:

To assist the Central African Republic in re-establishing and strengthening its judicial and legal systems, the transitional authorities are backed by a dedicated MINUSCA task force in charge of coordinating the arrests and transferring alleged criminals to the national judicial authorities for the legal actions. These include high profile suspects whose criminal proceedings we are following up.  Also, through a joint program with the UNDP and UN Women, JCS provides support for the organization of criminal court sessions at the Bangui Court of Appeal, the first of its kind since 2010.  To make sure that these suspects are accommodated in well secured environments, projects to rehabilitate two detention centers have been launched in Bangui. Besides, training sessions are regularly organized to the benefit of the MINUSCA Force on national and international standards on arrests and detention.

Supporting the extension of State authority throughout the country

A major challenge is the absence of functioning courts and prisons outside the capital. The reinstatement of the justice system therefore remains a priority, as very few of the country’s courts and detention facilities are operating. JCS accordingly provides support to the Ministry of Justice in extending the rule of law across the country by gradually reopening courts and detention facilities. Through Quick Impact Projects, we provide funding for the rehabilitation and refurbishment of courts and prisons. As such, two courts and eight prisons are currently being rehabilitated across the country.

Reforming of the penitentiary system

The JCS supports the state in the reform process of the CAR penitentiary system to ensure its conformity with international norms and practices on prison administration. So far, the JCS has contributed in the drafting of four decrees to apply the Law n° 12.003 of 2012 bearing on the penitentiary regime in the CAR. These drafts are pending validation by the Government. We are equally working with the Ministry of Justice on measures to improve on inmates’ healthcare procedures.

The JCS provides in-service and on-site training to build the capacity of the penitentiary and military staff on topics such as dynamic security, records management, non-violent communication, the respect of human rights and the treatment of juveniles and women. Over 500 staff have benefited from such training so far. The impact of the mentoring and training is noticeable within the prisons, with a net improvement in the search and control methods as well as the professional attitude of the security staff. We also organize workshops and seminars that bring together experts to exchange and upgrade their experiences on prison security. In the coming months, more specific training on crisis management in prisons will be organized.